I have always depended on the kindness of strangers.
Blanche Dubois in A Streetcar Named Desire

Several months ago, I had no idea that there was a sisterhood of mothers with grown and flown children. When I learned about the group, my immediate thought was “Nah, my eldest still has one more year to go before leaving home.” And then. Our eldest bared his plans after high school graduation. It meant leaving for another continent during the summer before twelfth grade to pursue a B2 language certification. It’s a prerequisite when one is applying to a public university in Europe.

My heart went beep, beep. There were late-night discussions with the hubby on doing what’s best for our child’s future. There were number-crunching dialogues on how we will send four children to university.  There were questions as to whether this was an answer to prayer. Was this a way out of sending our boy(s) to the Philippines where teenage boys are being killed with impunity? The boy and his father went over his goals and options repeatedly, an activity that they had begun maybe two or three years ago.

In the end, we both agreed that, whether he’d be accepted into a German university or not in the future, this child needed to further his language studies. After all, he had exhibited incredible self-discipline (he deleted his FB account to focus on his language studies which was conducted entirely at home) to attain A1 and A2 mastery and be eligible for a B1 class in the language school where he was enrolling.

And. We all agreed that the optimal plan was to send him away. The only other option was to enroll him in a language school in the city where he would have to pay rent but not get the immersion experience that he needed. Both options required the same financial investment but the latter offered the lesser return.

Why does supporting kids in their pursuits and plans almost always tear the heart? I don’t mean this in a negative way but when I consider my children’s abilities (one son can play the drum, guitar and piano – and we never paid for music lessons for him!) I am always heartbreakingly blown away at the feats they have accomplished at such a young age. They surpass me, these seeds that grew in my womb.

Back to our eldest. This is the child who did not care for the German language classes that he was forced to endure in ninth grade. The child who had resisted purchasing a language program because “Duolingo is free.” And now here he was, begging permission and money. We had no choice but to acquiesce. But our German friends whom we’d visited last year were moving to the US three weeks after my son would arrive. It was uncertain where he would stay afterwards. Nevertheless, he flew and we prayed for the best.

Indeed, his experience was more than we could have hoped for: he stayed with a family where he was forced to think and speak German all the time.

So. Now, here he is again and I’m awash in tears. Not by his presence. But by the letter that he handed to me within minutes of our arrival at home. There’s a line that opened the floodgates (or it could be hormones at this period in my life) amidst praise for my son’s language ability and a reminder to trust in God. 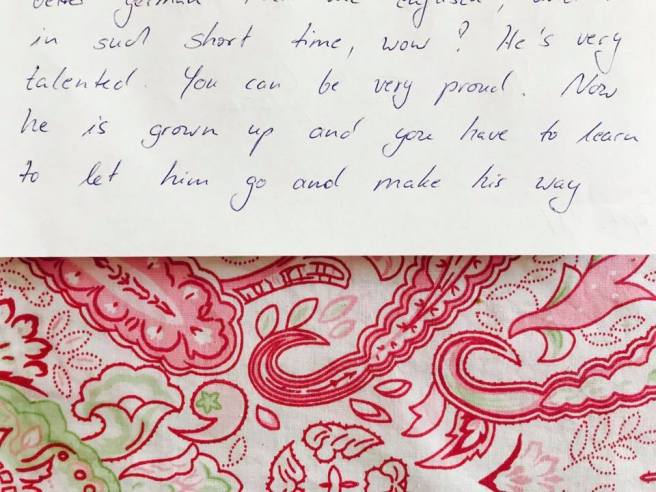 Reading it, I’m awestruck at the thought that the woman who became his surrogate mother, a working mom with small children still at home,  spared time to pen a letter to me, his birth mother. It’s handwritten. Who writes handwritten letters nowadays? Members of my generation, mothers with grown and flown children who understand each other’s concerns though we’re geographically and culturally worlds apart.

Indeed, I’m staggered at how she opened her home to my son despite being so busy with her own family and work. It’s not something I would have thought to do, being so tired of taking care of myself and my own brood. Beyond that, she affirmed our parenting and sought to quiet a mother’s heart. For being there and holding my child’s heart, Frau Maria, thank you.

It was International Women’s Day yesterday?

MOMents (on Billy Collins and MOMdays)

Frau Maria, this is for you: THE KINDNESS of STRANGERS

On being a Christian, motherhood and life after forty

Always with a Book

Recipe in a Bottle

Connecting to Friends, Old and New, Through Recipes, Gardens, and Dinner Parties

\"When to sessions of sweet silent thought, I summon remembrance of things awry!\" --- Toto Gonzalez\'s parody of Marcel Proust

Inspiration through my thoughts, experiences and travels

Better three hours too soon, than a minute too late - W.S.

Author of all things romance